Pion Inc, a leading provider of innovative analytical solutions for drug development, has introduced the ECM-XR, a new artificial extracellular matrix (ECM) that mimics the human subcutaneous environment, to enable faster formulation development with less reliance on in vivo testing. Developed for use with SCISSOR N3, the company’s first-in-class Subcutaneous Injection Site Simulator, the ECM-XR has the stability required to study drug release over extended periods of time. In tests with a range of drugs, including a small molecule, peptides, proteins, and a monoclonal antibodies, it demonstrated clinically relevant in vitro release profiles.

The SCISSOR N3 platform allows formulators to simulate the human subcutaneous, environment in vitro. The artificial ECM is critical for simulation of the subcutaneous injection space and helps to provide an effective model of drug transport.  Using the ECM-XR allows assays to run over longer timeframes, providing more valuable and complete information for extended-release formulation studies.

‘Our introduction of SCISSOR was a major step forward in providing formulators with an efficient and representative in vitro tool for simulating subcutaneous administration,’ said Bálint Sinkó, Vice President, Innovation and Development at Pion. ‘Subcutaneous drug delivery, which is growing in popularity, particularly for biotherapeutics, is associated with relatively slow drug release into the bloodstream or lymphatics. We’re therefore delighted to introduce an artificial ECM that enables testing over longer periods. The ECM-XR is highly stable and has delivered robustly representative data over periods of up to a week. We are confident that SCISSOR coupled with the ECM-XR can generate more informative data than is often derived from in vivo testing, more cost-efficiently.’

Injecting a therapeutic subcutaneously subjects the formulation to shear and an environmental transitions, such as a change in temperature, pH and surrounding reactive molecules. As a result, there is often poor correlation between the in vitro and in vivo behavior of subcutaneously injected drug formulations. The ability to assess the impact of injection on the active pharmaceutical ingredient directly aids formulation decisions and is particularly important for biopharmaceutical drugs, due to their inherently labile nature.

‘Pion is committed to delivering exceptional in vitro tools that effectively mimic in vivo behavior,’ said  Sinkó. ‘Using SCISSOR and the ECM-XR, formulators can make reliable and informed decisions on the relative bioavailability of alternative formulations for subcutaneous injection to bring clinically effective products to market faster.’ 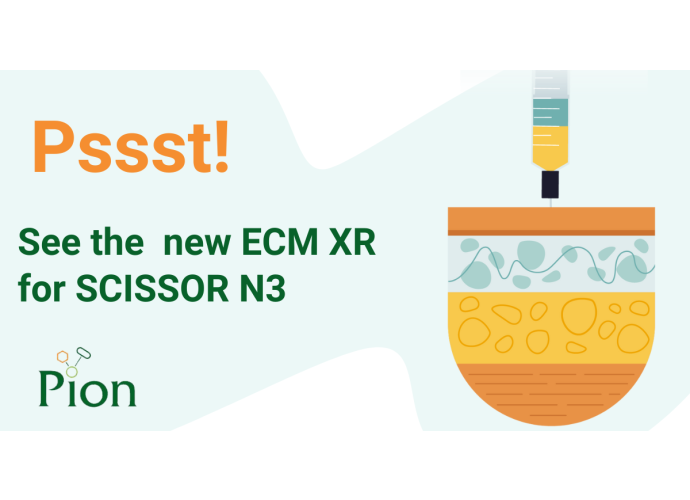