Pion supports your research with in-vitro scientific instruments, analytical services and equipment maintenance. All to deliver the accuracy of results required for more predictive decision-making. 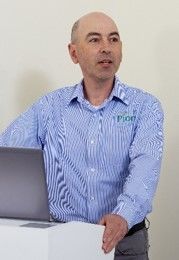 It is with deep shock and sadness that we say good bye to our gifted colleague and dear friend, Dr. Konstantin Tsinman, our Chief Scientific Officer, who passed away on Friday, April 24th after a 3 week illness.  Anyone who had the pleasure of meeting or working with Konstantin immediately experienced his kind and gentle spirit, his love of sharing his deep knowledge in a truly unpretentious manner, and his infectious enthusiasm for learning, friendship, and most of all, his family.

Konstantin joined Pion in 1998 when the company was just starting to expand.  Dr. Alex Avdeef, co-founder of Pion, recounts those early years.  “We were poised to develop innovative scientific equipment for pharmaceutical research and secured our first external funds from a prominent pharmaceutical company in New Jersey, in exchange for the promise of delivery of the first “PAMPA” instruments (Parallel Artificial Membrane Permeability Assay).  We had been working behind the scenes with Dr. Manfred Kansy of Roche (Basel), the inventor of PAMPA, for the preceding two years, before his famous seminal paper was published in 1998.  Konstantin had received his advanced degrees from the Institute of Metal Physics and the Dnepropetrovsk State University in Ukraine.  He and his family emigrated to America and we were happy to have him join us as our first scientific programmer”.   Four years later, Konstantin’s wife Oksana joined Pion as a chemist and eventually became the Lab Manager.  They worked side by side on many development projects and industry research.  Many years later, their daughter Tonia spent time working at Pion too.

Konstantin was the principal developer of the high throughput permeability analyzer and subsequently the high-throughput method for measuring solubility-pH profiles.  He continued investigating physicochemical factors influencing intestinal absorption and penetration across the blood-brain-barrier of pharma research molecules, expanding the scope of applications for the UV fiber-optic technique.  A long-standing challenge in drug dissolution measurement concerned assessment of multicomponent active pharmaceutical ingredients in exploratory formulations.   He developed the so-called “ZIM” technique to crack the challenge.  Its later applications to studying nanoparticle suspensions were groundbreaking.  It was such a clever idea that allowed the implementation of UV-Vis spectroscopy for real time concentration monitoring of complex phenomena.

Konstantin built his pedigree as a highly respected pharmaceutical scientist, working side-by-side with leading academic and industry thought leaders. He used his PhD in Physics and his love of mathematics to explain the physicochemical world for drug developers.  He worked hard and established himself as an industry expert, becoming a globally recognized name in physicochemical property measurement. He holds several patents and has authored or co-authored more than 30 articles published in primary scientific journals. His hard work and dedication ultimately earned him the position of Chief Scientific Officer at Pion Inc.

Konstantin was an intrepid traveler and loved to spend time with family and friends. Whether hiking, cross-country skiing, or deep-sea fishing, he embraced every new opportunity with enthusiasm and fascination. He and his wife, Oksana, were known to hike the Minuteman Trail from Bedford to Boston, just to enjoy the day and celebrate with good friends along the way.

Konstantin Tsinman was not just a respected colleague, scientist, and scholar.  He was a cherished friend to all of us. Most importantly, he was a beloved husband to Oksana and father to their daughter, Tonia.  No words will ever express how much he will be truly missed.

See our full range of our analytical testing capabilities:

See how our Analytical Services team can support you today!

Products at a Glance

Servicing for Pion devices and third-party equipment. All maintained to manufacturer’s specifications and performance levels. Stay confident in your results and the productivity of your program.

Our analysts can run a wide range of in-vivo predictive assays specialising in PhysChem and in-vivo prediction. As well as running standardised assays, we can also work with you in consultative partnership.

We invest our profits into developing next-generation technology. See why.

See the latest industry citations of Pion instruments and services.

See the latest events that Pion is supporting and attending.

Pion’s quick response time to our service needs keeps downtime to a minimum in our lab.

They truly care about the customer experience and the financial impacts on our company.

Pion’s service is the gold standard for our industry. They are in a league by themselves!

Find out more about Pion

What are your drug development challenges? Let us know and see how we can help.